On 26 April 2017, the Young Leaders Project “New Generation II” in the Gaza Strip, in cooperation with our partner Save Youth Future Society (SYF), celebrated its closing ceremony. Twenty-six young men and women participated in a fifteen-month long project, running from February 2016 until April 2017. 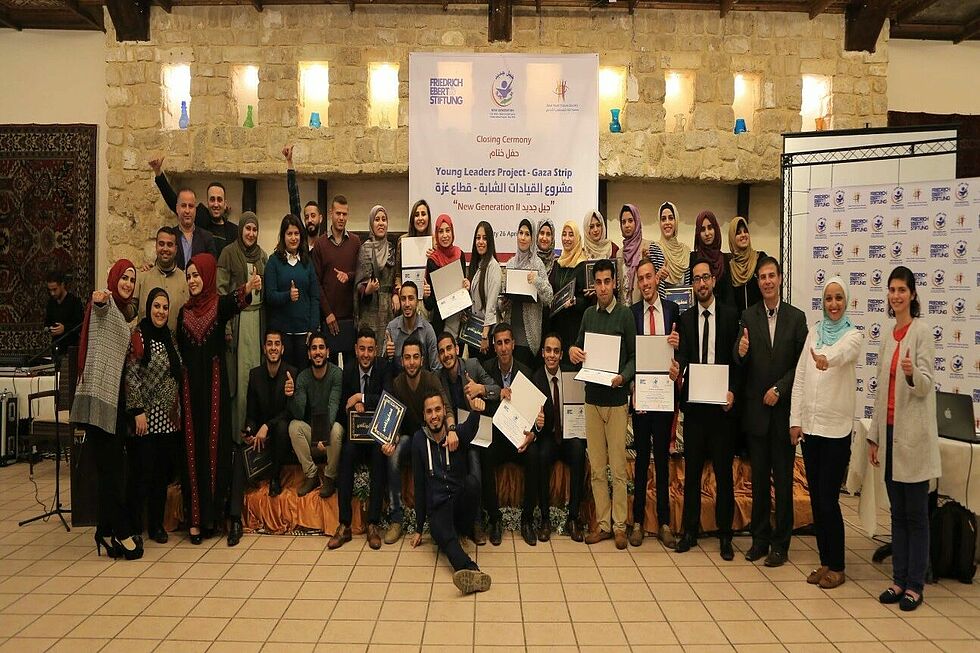 The project encompassed three separate phases. The first phase of the project consisted of methodological trainings that enhanced the personal skills of participants in the fields of teambuilding and teamwork, leadership, professional communication strategies, moderation and presentation as well as project- and time-management. The second phase centered around policy debates on issues such as civil and human rights, freedom of expression and media, democratic systems and democratic transformation, principles of social democracy, gender policy, political ideologies as well as climate and environmental change. Subsequent to the training and debate sessions, the 26 young men and women conducted self-created small initiatives about social volunteering, tolerance within society and protection of the environment. A selected number of participants of the Young Leaders Project will be provided the opportunity to participate in future local, regional and international workshops together with their counterparts in the region.

At the closing ceremony of the project held on 26 April 2017 in Gaza city, the head of the local partner SYF expressed his confidence in the participants to carry out positive change in society and encouraged them to partake in building the future of their country. Additionally, two young leaders shared their impressions and thoughts about the project. They thanked both FES and SYF for the opportunity, which encouraged them to be more active in the fields of democracy, human rights, peace and equality. At the end of the closing ceremony, three groups of the young leaders presented the self-implemented initiatives.

The project contributed in raising awareness about important political and social issues and encouraged participants to take more responsibility in their communities. It provided participants with a sense of how they can make a difference in their community, for example through their initiatives, particularly in the areas of politics and inclusiveness.