From Monday 23th to Thursday 26th April 2018 the Friedrich-Ebert-Stiftung (FES) Palestine, in cooperation with its sister office of FES Morocco, organized a workshop on the topic “Political Feminism: Feminist perspectives for a just economic system” that included local experts, stakeholders and local FES MENA staff. The workshop was part of a series of activities in the FES MENA Department within the framework of the FES divisional project “Political Feminism” and took place in Rabat, Morocco. 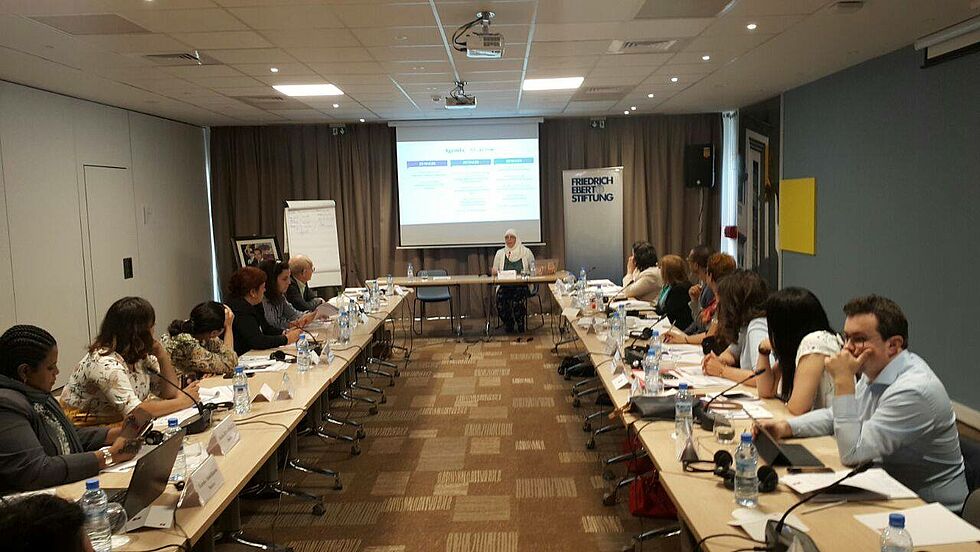 Following the Kick-off workshop in November 2017 in Berlin and several national workshops around the region, the workshop in Rabat focused on the setting of concrete goals for the future achievement of a gender-just economic system throughout the region. Experts and representatives from around the region came together to mutually discuss national and regional goals and to develop new perspectives on the topic through enriching input sessions by their colleagues. On the first day, Seija Sturies, Director FES Morocco in Rabat and Dr. Beyhan Şentürk, Director FES Palestine in Jerusalem and Head of Coordinator Committee inaugurated the three-day workshop with their warm welcome addresses.

Afterwards, the participants discussed their visions of future gender-just countries and presented their elaborated short- and long-term goals in national groups. On the second day, Jonathan Menge from FES headquarter, Berlin, explained the initial intention and strategic approach of the divisional FES-project “Political Feminism” to the participants. With his input in mind, the participants then started several sessions in which previous experiences and good-practice examples were exchanged and common regional goals were set. They followed up with the main areas of implementation and discussed what changes need to be tackled right away and what changes to structure and ideology must be achieved in the long-term.

On the third day, the group concluded in producing the finalized goals from the workshop’s discussion. After the development of concrete goals for a gender-just economic system during this workshop, the participants are looking forward to the upcoming regional workshop in Tunis in September 2018. In this workshop they will discuss concrete strategies and will outline a region wide project that can be implemented by all regional offices.