On November 21st and 22nd we welcomed Amira and Kirstie from FES-office Israel. As part of our two day interns exchange we introduced them to our work and organized meetings with some of our partner organizations. 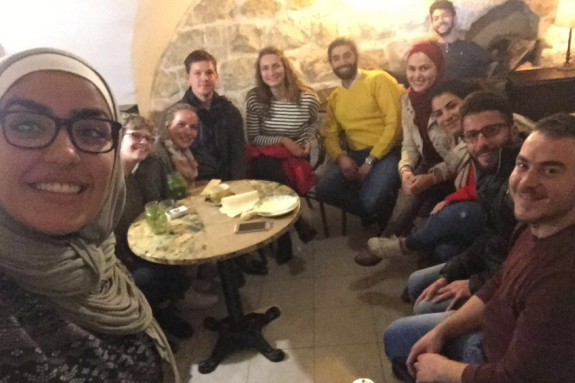 During the first day our program manager Nidal Alayasa introduced Kirstie and Amira to his work at FES Palestine. After a transfer via Qalandia checkpoint to Ramallah the interns visited Birzeit-University, one of the biggest universities in the West Bank, and the Yasser-Arafat-Museum, which since its opening in 2016 elaborates on the history of one of the most influential Palestinian politicians of all time. Afterwards they met with participants of our Young-Leaders-Program and political activists to talk about the current political situation in Palestine.

On the second day the interns learned more about the political situation in East-Jerusalem, as they were hosted by Dr. Mahdi Abdul Hadi, Director of our long-time partner, the Palestinian Academic Society for the Study of International Affairs (PASSIA). He provided an introduction into the Middle East Conflict and answered questions on latest political developments in Palestine and the region. Finally, the interns met with Program Manager Christoph Klement and director of FES Palestine, Dr. Beyhan Sentürk for insights into their work and the history of the office in East Jerusalem.