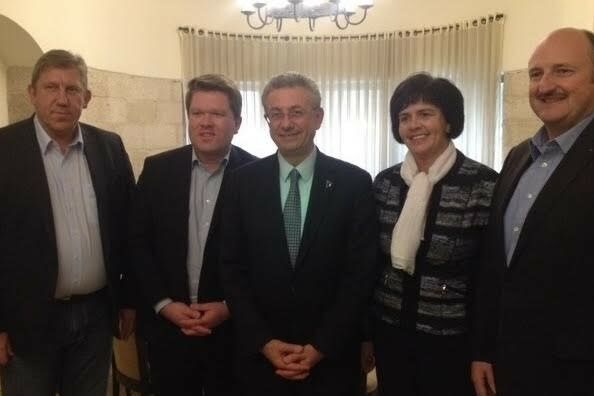 Following a short introduction at the FES office in East Jerusalem, in which central questions relating to the Israel/Palestine conflict and the Middle East Peace Process were discussed, the delegation visited the Field Office of the United Nations Relief and Works Agency for Palestine Refugees (UNRWA). The parliamentarians were briefed on Palestine refugees, focusing particularly on the humanitarian conditions in the refugee camps and the role of international law in the occupied territories. International law was also a hot topic of conversation during the delegation’s meeting with Dr. Mustafa Barghouti, General Secretary of the Palestinian National Initiative. Barghouti welcomed the open and frank discussion with the parliamentarians and expressed his optimism that his party and SPD will continue to work closely together in the future. The visit ended with a tour through East Jerusalem with Dr. Rami Nasrallah, Director of the International Peace and Cooperation Center. The tour allowed the politicians a better grasp of the physical consequences of the ongoing conflict. Focusing on the separation wall along with other physical barriers, the delegation learned about the various means and ways through which Palestinians in Jerusalem and the West Bank are discriminated against.

During their visit the German parliamentarians were confronted with various aspects of the Israel/Palestine conflict and engaged in a fruitful exchange with a number of Palestinian organizations. The delegation hopes builds to build on these relations in the future.