The Friedrich-Ebert-Foundation (FES) East-Jerusalem was delighted to welcome FES-President Kurt Beck, Dr. Roland Schmitd (FES-Secretary General), Christiane Kesper (Director of the Division for International Development Cooperation at FES) and Dr. Ralf Hexel (Head of Department for Middle East and North Africa at FES) as well as Reiner Hoffmann (President) and Kurt Beck (Executive Secretary) of the Confederation of German Trade Unions (DGB) at the FES office in the Palestinian Territories from 1-3 June 2016. 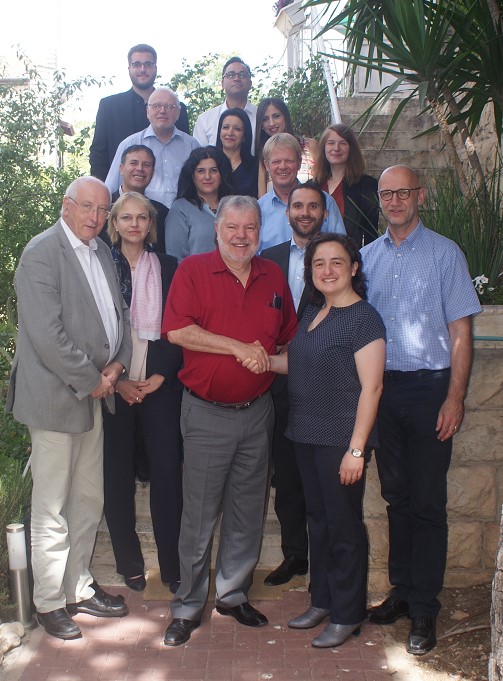 As part of their visit to Israel and the Palestinian Territories, the delegation spent three interesting days in Jerusalem and Ramallah in order to learn about the current political situation and the work of FES on the ground. Particularly the meetings with Peter Beerwerth, Head of the German Representative Office in Ramallah, and Al-Mubadara Secretary-General Dr. Mustafa Barghouti offered the opportunity to discuss the political and legal situation in the Palestinian Territories. These discussions tackled domestic challenges such as the national political division and the inclusion of women and young Palestinians as well as international issues like the French Peace Initiative and the ongoing tensions between Israel and the Palestinian Authority. Furthermore, a tour of the Shepherds Brewery helped the delegation understand the national and international challenges and obstacles with which young entrepreneurs and the Palestinian economy are confronted. Additionally, a meeting with Shaher Saad, Secretary General of the Palestine General Federation of Trade Unions (PGFTU), gave an insight into the employment market and the situation of trade unions within the Palestinian Territories. Furthermore, the delegation managed to get an idea about the Israeli occupation and its consequences for Palestinians’ everyday life, visiting the wall and checkpoints with the International Peace and Cooperation Center (IPPC) and receiving a political tour of Jerusalem’s Old City.