A Ramallah court’s decision to block 59 news websites in the West Bank has drawn sharp criticism from inside and outside the Palestinian government. The decision highlights the discourse within Palestine on the issues of cyber security as well as freedom of speech. 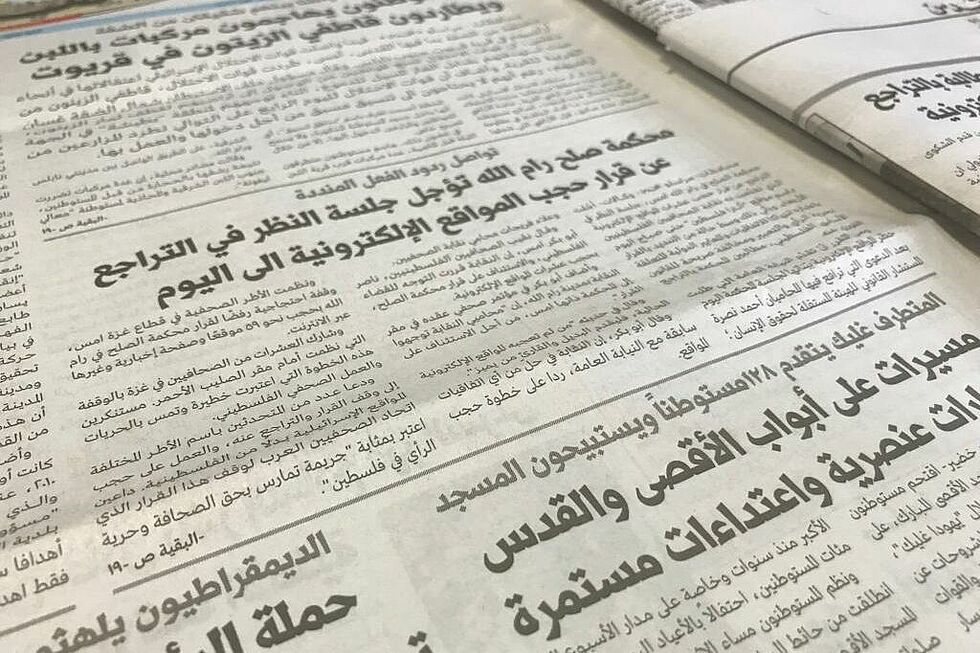 The Ramallah Magistrate Court announced the blocking of 59 news and social media URLs and websites, on the 17 of October. Most of the blocked websites are political in nature and are associated with either Hamas or dismissed Fatah leader Mohammad Dahlan. While the decision was seen as an attempt by the PA to silence critical voices of its policies, it was widely criticized not only by the Palestinian civil society but also by the government and the PLO themselves.

The decision to block the websites was taken after the Palestinian Attorney General filed a lawsuit against them based on the 2018 law on cyber crimes. The law on cyber crimes No. (10) of 2018 was issued by presidential decree, which has been the chief method of legislation in the West Bank since the collapse of the Palestinian Legislative Council after Hamas’ takeover of the Gaza strip in 2007. The law in question was the successor to the 2017 law, which was panned when issued by the majority of Palestinian human rights organizations as vague and unspecific. Human Rights Watch’s Middle East Director Sarah Leah Whitson expressed at the time: “the cybercrime law grants thin-skinned authorities virtually unrestrained power to block websites, conduct surveillance, and assemble reams of data on ordinary people”.[1] The amendment to the 2017 law came after months of pressure from local and international human rights activists and organizations. Nonetheless, based on article 39 of the 2018 law, the court decided that the websites “threaten national security, public order, or public morals”.

Generally speaking, the websites in question support either Hamas or Mohammad Dahlan. As aforementioned, the relationship between the Fatah-dominated PA and the de facto authority in the Gaza Strip, Hamas, has steadily worsened over the past 12 years. In Parallel, Dahlan is a known political rival of the president of the Palestinian Authority (PA), Mahmoud Abbas. Dahlan, a former member of the PLC on behalf of Fatah and a former member of its highest party body, the Central Committee, was expelled from the party. Since then he has resided in Egypt and the Gulf and has publically criticized and expressed hostility towards Abbas and members of his administration.

Moreover, this is not the first decision to block websites that oppose the PA. In 2017, for example, 11 websites associated with Dahlan and Hamas were blocked under a directive from the office of the attorney general. The PA has used the aforementioned cyber crimes law and its predecessor to suppress freedom of expression on the Internet. Also in 2017, the PA security forces arrested a political activist in the city of Hebron for posts on social media that the PA disapproved of and then arrested a prominent human rights and anti-settlement activist from the same city for coming to the former’s defense on social media. [2]

The court decision was nearly unanimously condemned by Palestinian politicians, factions, civil society organizations, and observes alike. The Palestinian government of Mohammad Shtayyeh was one of the first to call upon the court to reconsider its decision, while maintaining the government’s support for an independent judiciary. [3] Several PLO Executive Committee members expressed similar opinions, as one of them went as far as to call the decision “contradictory to Palestine’s commitments to international agreements and [even] the Palestinian Basic Law”.[4.1][4.2] The Palestinian civil society was even more forceful in its response. Leading Palestinian NGOs, including Al-Haq legal center and the Palestinian NGO network, publically condemned the decision calling it a “slap in the face”, and blamed the government for this decision.[5]

Furthermore, the Union of Palestinian Journalists also condemned the decision and filled a counter lawsuit, along with the Independent Commission for Human Rights, to reverse the decision. As of the drafting, the court has yet to issue a decision on the matter as the case has been postponed three times.[6]