On Monday, 1 May 2017, the Friedrich-Ebert-Stiftung (FES) in cooperation with the partner Pal-Think for Strategic Studies, organized a round table discussion entitled “The Jordanian-Palestinian Relations and ways for development” in Gaza City. 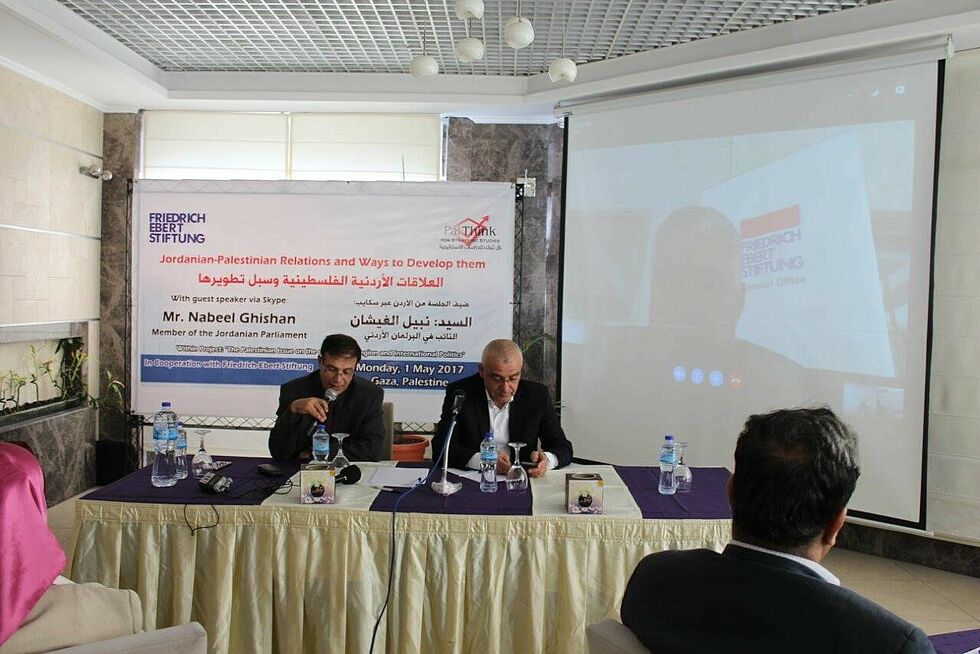 Mr. Nabeel Ghishan, member of the Jordanian Parliament, was the guest speaker and joined the discussion via Skype from Amman. The discussion focused mainly on the Palestinian-Jordanian relationship. Invited to the round table discussion were politicians, representatives of civil society organizations, as well as academics, researchers and journalists.

In the beginning, Mr. Ghishan reviewed the Jordanian-Palestinian relationship which had passed through many stages, and pointed out the differences between the era of King Hussein, who was very interested in having Jerusalem and the West Bank under his rule, and the era of King Abdullah II, who accepted the Palestinian political aspirations regarding Jerusalem and an independent Palestinian state. Mr. Ghishan confirmed the current high-level tripartite political coordination between the Palestinian National Authority, Jordan and Egypt on the recent developments regarding Palestinian issue in the context of communication with the new US administration. He pointed out that the US administration is currently active to revive the Middle East Peace Process.

Mr. Ghishan further spoke about the positive results of the Arab summit in Jordan in the previous month that achieved Arab reunification, especially between Saudi Arabia and Egypt. He stressed that Israel is not ready to be a real partner in creating peace in the Middle East and expressed his opinion that more concessions would have to be made. At the same he time thinks that there is no Palestinian leader or Arab party that would accept ever giving up East-Jerusalem as a capital of a future Palestinian state. He called on all Palestinians to put pressure on Fatah and Hamas to achieve reconciliation and unity in order to face the current challenges. He called for maintaining the presence of Christians in Jerusalem, Bethlehem and in all of Palestine, rejecting the extremism that endangers national unity.