On Sunday, 19 March 2017, the Friedrich-Ebert-Stiftung (FES), in cooperation with the partner Pal-Think for Strategic Studies, organized a round table discussion entitled “The Changes in the Arab World and its Impact on the Palestinian Issue” in Gaza City. 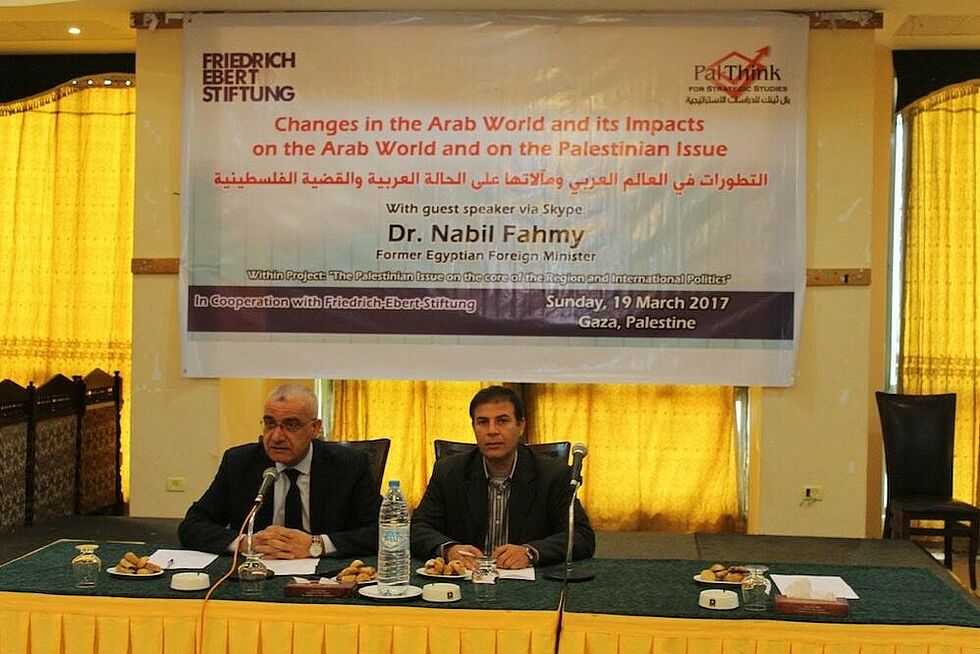 Dr. Nabil Fahmy, former Egyptian Minister of Foreign Affairs, was the guest speaker and joined the discussion via Skype from Cairo. The discussion focused mainly on the rapid changes in the Arab world, as well as the Palestinian-Egyptian relationship. Invited to the round table discussion were politicians, representatives of civil society organizations, as well as academics, researchers and journalists.

In the beginning, Dr. Fahmi spoke about the current changes and crisis in the Arab states in the previous years. In his opinion, it is of vital importance that the heads of Arab states coordinate their political positions at the Arab summit held at the end of March 2017 in Jordan. Of particular interest will be the political situations in Syria, Libya, Yemen as well as the Palestinian issue. According to him, Arab leaders need to identify a new approach and coordinate better among themselves in order to counter the deterioration of these situations. Furthermore, all forces should be united to combat the spread of terrorism.

Dr. Fahmy stressed the importance of the Palestinian-Egyptian relationship and the role of Egypt in the Palestinian-Israeli conflict. Nevertheless, he expressed the opinion that the relationship between the two states could still be improved. Addressing the audience, he stated that the Palestinian issue continues to be of relevance and that he does not expect Palestinians to easily give up their aspirations to form an independent state.

From his point of view, Egypt is currently working on overcoming the internal discord within Fatah, in order to pave the way for a possible reconciliation between Fatah and Hamas. The internal Palestinian unity and the creation of common political vision, he argues, are the most important prerequisites for a negotiated settlement with Israel and finding a final solution to the conflict. He ensured the guests that Egypt would not give land in the Sinai Peninsula to the Palestinians in order to establish a Palestinian state. He disregarded this as a rumor spread by Israel and not to be taken seriously.