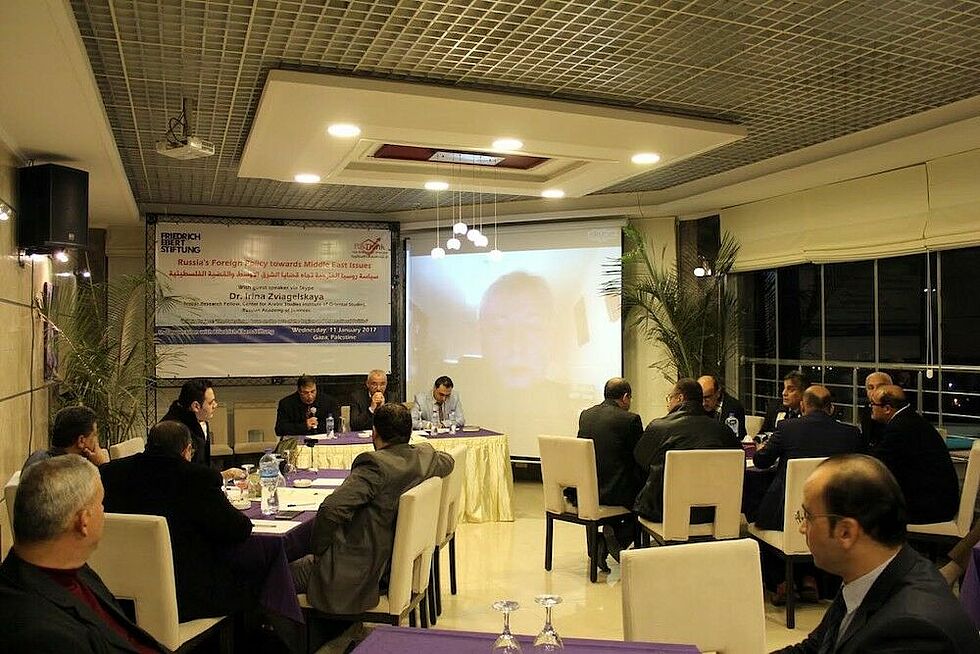 The guest speaker via Skype was Dr. Irina Zviagelskaya from Moscow, a Senior Research Fellow at the Center for Arabic Studies in the Institute of Oriental Studies of the Russian Academy of Sciences. The round table discussion involved many challenging issues related to the Palestinian cause in the face of Russia’s foreign policy towards Middle East issues. The session was attended by groups of political analysts, researchers and community activists.

As a brief introduction Dr. Irina Zviagelskaya started out by speaking about Russia’s general foreign policy towards the Middle East underlining that Russia’s intervention in Syria aims to keep the Syrian government stable. Moreover, she pointed out that Moscow’s intervention in Syria occurred as a result of US refusal to fight terrorism in Syria and not dealing with President Vladimir Putin’s suggestion to build a global alliance to fight terrorism. According to the scholar, this has led to the establishment of separate military alliances led by both Moscow and Washington.

Subsequently, she moved to the issue of the Palestinian cause in particular. Dr. Zviagelskaya explained that especially after the Arab Spring, of which the Syrian Civil War is a result, the foreign policy of the Russian Federation towards Palestine has become a secondary commitment among its global interests, not the central issue. However, she stressed that Russia continues to endorse the Palestinians’ aspiration for statehood and adheres to the conflict-ceasing principle of a two-state solution. For this to happen Russia is aware of the necessity, and supports endeavours, to stop Israeli settlement activities. Indeed, as Dr. Zviagelskaya further asserted, Russia’s position in the UN Security Council has been considerate of a future Palestinian state by backing resolutions against settlement activity in the territory of the Palestinian National Authority. Based on the above and in light of Russia’s foreign policy towards Middle Eastern issues, she indicated that there are common interests between Russia and the new US administration under Donald Trump, especially when it comes to fighting terrorism. Notwithstanding, as the audience kept listening to her remarks, Dr. Zviagelskaya expressed pessimism of Trump’s attitudes towards the Palestinian question since his plan to move the US Embassy from Tel Aviv to Jerusalem would negatively affect the Palestinian and Arab positions vis-à-vis the new US administration which is part of a mediated solution.

Furthermore, in this context, she concurred that the Israeli-Palestinian issue will remain the pivotal issue in the Middle East and is even exacerbated by the Palestinian political division between Hamas in Gaza and Fatah in the West Bank.