On Thursday, 9 February 2017, the Friedrich-Ebert-Stiftung, in cooperation with the partner Pal-Think for Strategic Studies, organized a round table discussion entitled „Prospects of the Israeli Policy toward the Palestinian Cause in the near Future” in Gaza City. 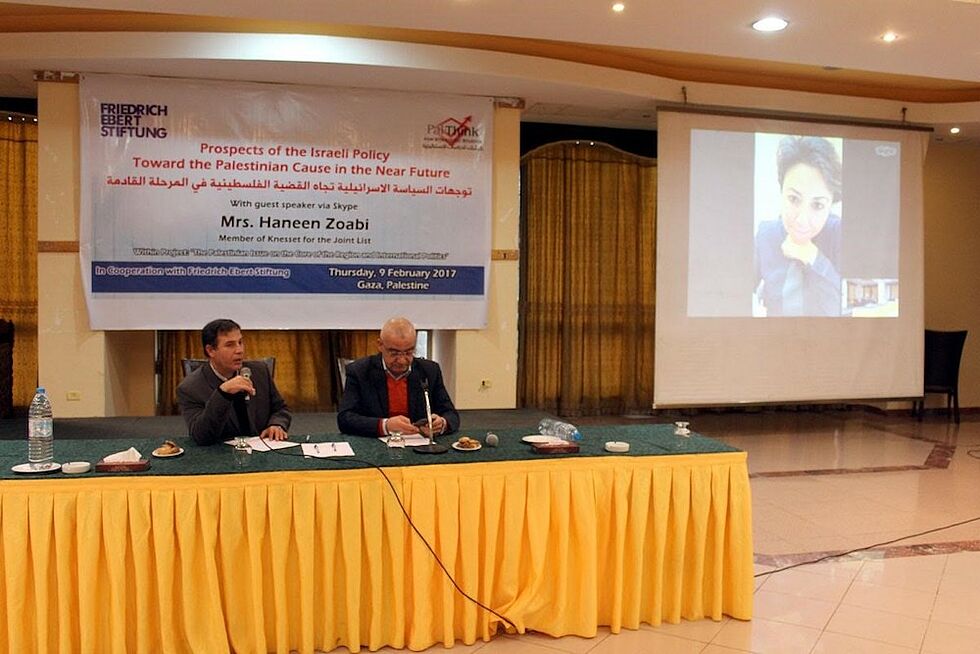 Ms. Hanin Zoubi, an Arab-Israeli politician of the Balad-Party and since 2009 a member of the Israeli Knesset, was the speaker connected by Skype from Nazareth. Invited to the round table discussion were politicians, representatives of civil society organizations, academics, researchers and journalists. The discussion included several issues of the Israeli policies towards the Palestinians in the West Bank and the Gaza Strip, as well as the Arab-Israeli minorities in the so-called “48 territory”.

In the beginning Ms. Hanin Zoubi, who is considered controversial within the Israeli society, spoke about Israel’s policy towards the Palestinians in general, and emphasized that within Israel the moderate and progressive voices have become much weaker, so that the right-wing parties have influenced the Israeli politics significantly in the last years. The two-state solution is no longer a major topic to be talked about. She added that Israel had accomplished three achievements in 2009, namely: The separation fence around the West Bank, the blockade on the Gaza Strip, and the security coordination with the Palestinian security apparatus. These three factors, she concluded, establish that Israel’s occupation of the Palestinian territories remains without long-term costs.

Answering some of the questions raised by the guests in Gaza, Ms. Zoubi emphasized the need of Palestinian policy to distance itself from its long-standing passive role and to develop and adopt its own Palestinian policy. That is necessary in order to deal with the current Israeli policies, as well as to face the expected extensive support from the new US administration towards Israel in the near future.