After two successful discussion panels this year, the Palestine Economic Policy Research Institute (MAS), in cooperation with the Friedrich-Ebert-Stiftung (FES), organized a third roundtable on 27 April 2016 to discuss „Regional Development in Palestine “. In addition to the three main speakers, representatives of trade unions, the private and public sectors, academia and civil society participated in the debate. 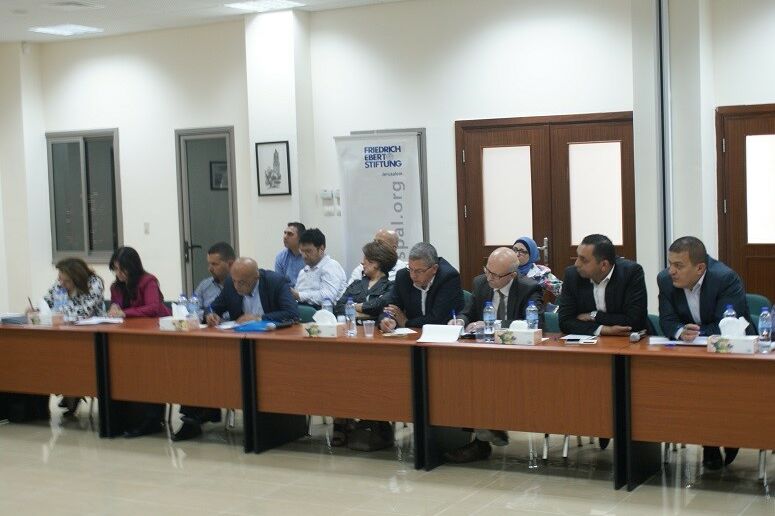 Based on a study that was published by MAS in 2011, the three main speakers presented their views. Dr. Hussein al-A’raj, currently Minsiter of Local Government, emphasized that the reconstruction of existing infrastructures needs to be the priority of further development planning. For Dr. Samih al-Abed, former Minister of Public Works and Housing, it is the general scarcity of resources as well as the lack of access to them that poses the greatest challenge for reliable and long-lasting planning and development in Palestine. MAS director Dr. Nabeel Kassis stressed the necessity for economic, fiscal, and administrative de-centralization processes in both Gaza and the West Bank.

The following debate with the dozens of participants focused mainly on potential structural reforms as a precondition for sustainable development planning. Additionally, the participants discussed how responsibilities between municipalities and ministries can constructively and successfully be divided and implemented in order to ensure a socially coherent and enduring development in the different regions. Thus, the different experiences and perspectives that were shared in the discussion represent an integral part of this process.