In April 2016, a new social security law came into force in the Palestinian Territories. Due to massive protest from the civil society, however, the law has since been withdrawn and remains frozen until mutual consent between all relevant stakeholders can be found. On this occasion, the Palestine Economic Policy Research Institute (MAS) and the Friedrich-Ebert-Stiftung (FES) jointly organized the roundtable discussion ‘Evaluating the New Social Security Law’ on 11 May 2016. 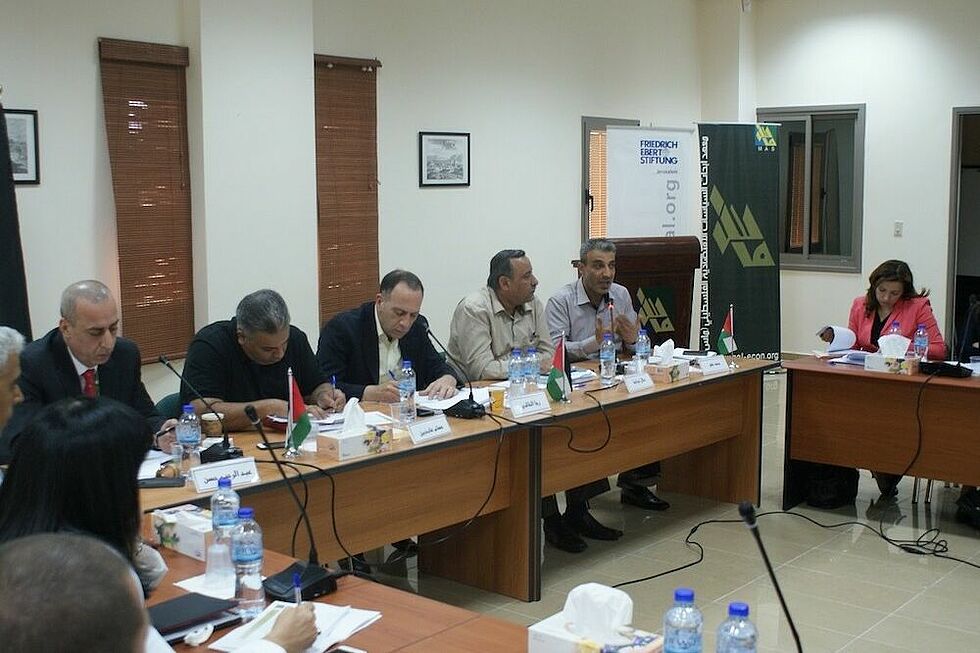 The central comments presented by the invited speakers focused on the process of formulating the law and critically weighted up its positive and negative elements. Based on his research paper dedicated to the new law, Mohammad Khadar, Lecturer in Constitutional Law at Birzeit University, opened the debate by presenting the core content of the new law and highlighted particularly those changes that have been added after deliberation with relevant stakeholders. In contrast, the Director General of Work Relations at the Ministry of Labor, Belal Zawabeh, pointed out the positive aspects of the law and explained how the legislative process has been framed by legal and administrative structures. Issam Abdeen from Al-Haq criticised the fact that core elements of the law have been changed late on in the development process, effectively side-lining the results of the consultations that had occurred previously. The view that this procedure has damaged the mutual trust between the government and civil society was also shared by Abed al Rahim Al Hasan, member of the Association of Banks in Palestine, who additionally challenged the effectiveness of the new law.

In the open discussion that followed, the participants criticized how the law came into force by claiming that the general process was in transparent. They further argued that the elements which have been changed following the deliberation process are problematic, both in form and content. The participants also agreed that the independent status of the National Fund does not provide any control mechanisms for the government, effectively shifting public funds into private hands. The representatives from the public and private sectors and civil society concluded that the law needs to be revised because many aspects of the law are both imprecise and not compatible with existing legislation. According to the participants, the law generally represents a setback for many workers in the Palestinian Territories.