Young people with creative ideas – that’s whom a delegation of German members of parliament, all belonging to the SPD-fraction, were looking for when visiting East Jerusalem and Ramallah from April 1st to April 4th, 2016. 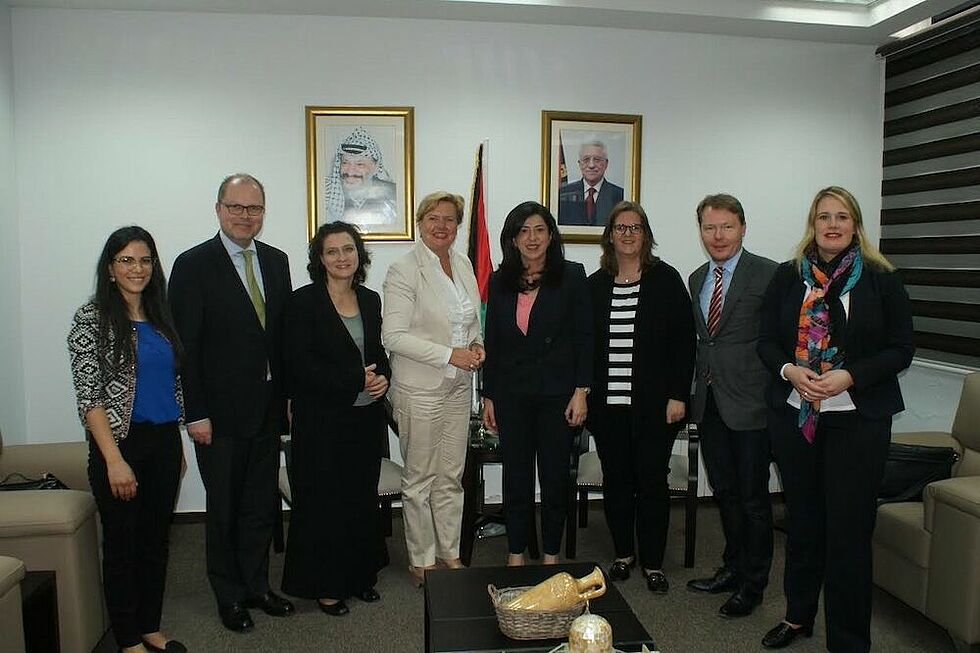 What they found was: a young entrepreneur combining traditional Palestinian patterns with modern fashion design, three brothers that founded a brewery manufacturing beer according to the German purity law, others who organize skype sessions with psychologists, to name only a few. But good ideas need support. Such discovered the Parliamentarians in “Leaders Organization”. Shadi Atshan from Leaders explained to the members of Parliament how “startup weekends” in universities help to spread the spirit of entrepreneurship on the Palestinian youth. Being an accelerator, Leaders Organization provides not only financial support, but also assists in organizational and juridical questions coming up to the young company founders. Discovering the co-working space “Work Factory”, the deputies understood how important it is to be in a good environment when setting up a new company. However, start-ups in Palestine face many obstacles due to the political situation and the legal framework for investment law. Alaa Sayej, founder of the successfully run Bierzeit Brewery explained how import restrictions prevented him from starting the production process. Moreover, the registration procedure for companies, shaped by laws from the 1960s, nearly made his business impossible.

Throughout the meetings it became obvious how closely economic possibilities and the current political situation are linked. The latter was the subject of discussion in a wide range of meetings with ministers, academics, NGO activists, trade union representatives and officials of the sister parties.

As a prelude of their visit, Christian Lange, Kerstin Griese, Eva Högel, Christian Flisek, Johannes Fechner, Christina Jantz-Hermann, and Carola Reimann met with Mr. Peter Beerwerth, the German Representative to the Palestinian territories. Furthermore, members of parliament had the chance to discuss recent developments in the educational system with Dr. Sabri Saidam, Minister of Education, and reviewed the national strategy for economic development with Ms. Abeer Odeh, the Palestinian Minister of National Economy.

Dr. Mustafa Barghouti, the Secretary General of the social-democratic sister party “Al-Mubadara” conferred with the delegates about the current political developments in Palestine. The reconciliation talks, the French Initiative and the continued settlement policy were discussed. During additional meetings with key decision makers from politics, academia, and business, e.g. Dr. Nabil Shaath, Fateh Commissioner for Foreign Relations, Majed Bamya, First Secretary at the Ministry of Foreign Affairs, and Sam Bahour, a Palestinian businessman, the delegates received updates on the current situation in the occupied territories and Gaza.