In cooperation with the Friedrich-Ebert-Stiftung (FES), the Palestine-Israel Journal (PIJ) presented its latest issue „The Dual Legal System“ on 17 May 2016. To mark the event, FES and PIJ organised a panel discussion with prominent politicians and guests from academia and civil society. 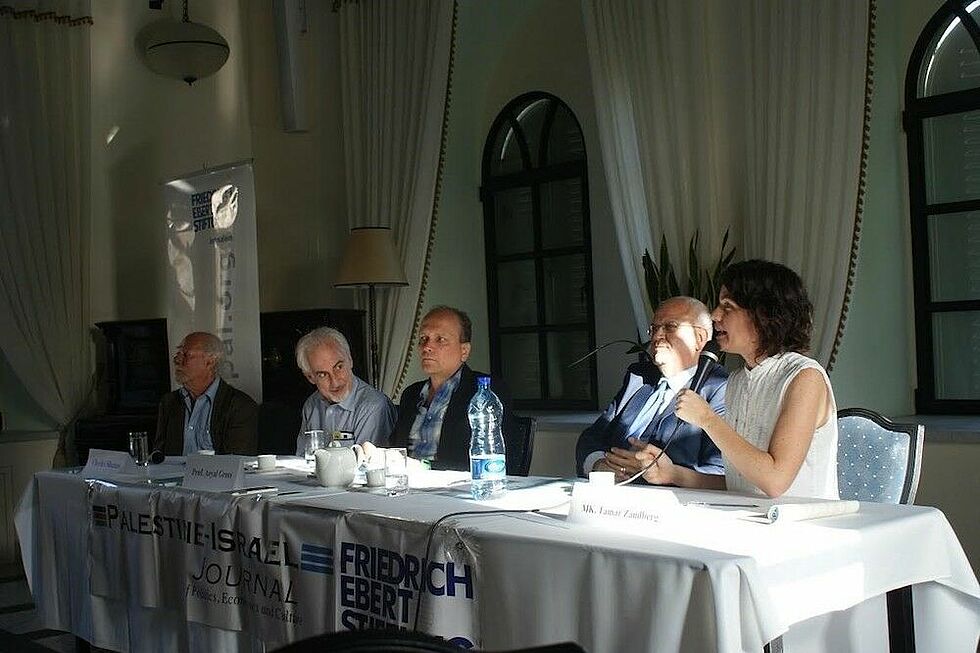 Based on the latest issue, the discussion focused on the political and legal aspects of the current legal situation in the West Bank. Early in the discussion, the participants agreed that the current situation clearly violates international law. While PLO Secretary General Saeb Erekat described the current system as an apartheid system, Ayeal Gross, Professor for constitutional and international law at Tel Aviv University, pointed out the system’s hybrid character: the Palestinian Territories are not independent, but neither does the concept of annexation fully apply – Israel does not claim the West Bank as Israeli territory – nor does the concept of occupation, since the situation does not comply with the Geneva Conventions. Despite different descriptions of the current situation, the participants agreed that the two-state-solution is the only way to move forward. The panalists highlighted, however, how the right-wing policies of the current Israeli government hinder such a solution but especially Knesset member Tamar Zandberg (Meretz) asserted that there are plenty of factions within Israeli society fighting for dignity, justice, and democracy. Thus, according to the speakers, it is necessary to increase international pressure on the Israeli government. Since laws always leave room for interpretation, as Charles Shamas from MATTIN Group illustrated, the existence of a legal system alone does not guarantee protection for Palestinians. In order to improve the situation, the participants highlighted the necessity to better communicate the political and legal realities to both national and international audiences.

The interaction with the audience that followed the discussion illustrated once again that the current situation requires the involvement of all parts of society. The guests from academia and civil society shared the view that improving the political and legal structures is a central pre-condition for sustainable peace. As Hillel Schenker, Co-editor of PIJ and facilitator of the discussion, made clear in his concluding words, the thorough and well-argued contributions in the latest issue of PIJ provide important sources of information to pursue sustainable political, legal, and social change in the Palestinian Territories.