Following the adoption of the Palestinian Authority’s (PA) budget for 2016, the Palestine Economic Research Institute (MAS), in cooperation with the Friedrich-Ebert-Stiftung, hosted this year’s first Roundtable discussion on 20 January 2016. The discussion will be one in a series of joint events offering representatives from politics and academia, as well as interest groups from the private sector and civil society, a forum to discuss economic policy issues. 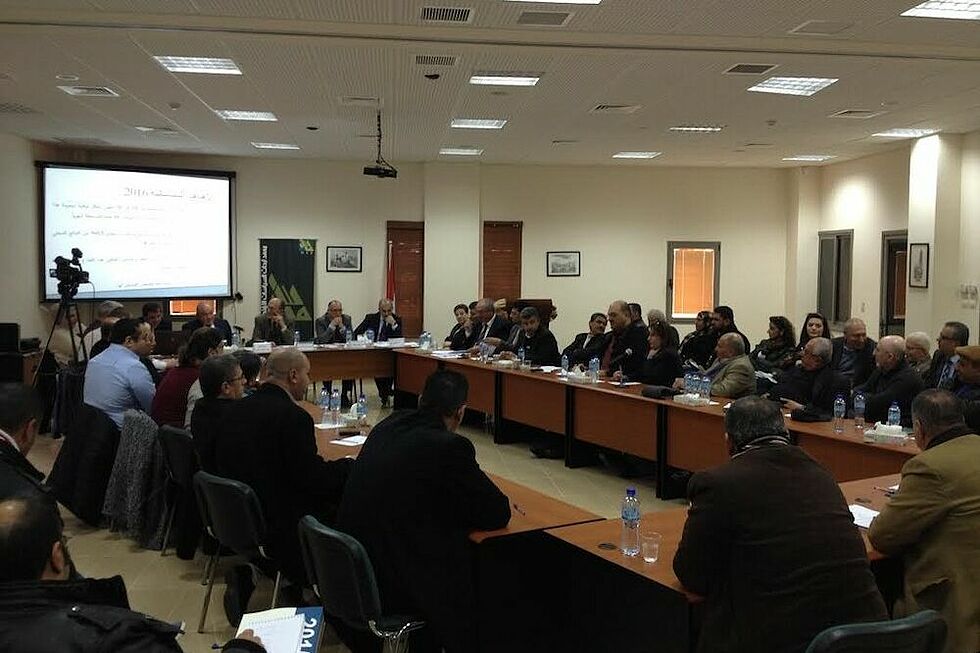 As in the past, the Roundtable provided a platform to discuss the PA’s finalized budget plans in addition to recent economic developments. Dr. Nabeel Qassis, Director of MAS and moderator of the event, was pleased to welcome high-ranking representatives of the PA, including Minister of Finance, Dr. Shukri Bishara, as well as Mr. Ibrahim Barham, chairman of PalTrade. Prof. Adel Al Zagha from Birzeit University and representatives of the private sector also took part in the discussion.

On the one hand, the participants focused on an analysis of the 2015 budget, which was implemented as planned despite a large part of it being dedicated to reconstruction measures after the 2014 Israel-Gaza conflict. The Minister of Finance also used the opportunity to present the 2016 budget. Dr. Bisahra stated, however, it was difficult to make reliable predictions on economic development in the Palestinian territories due to the recently deteriorating security situation. Nonetheless, he was optimistic about achieving – together with its international partners – the government’s economic objectives for 2016.

In the subsequent debate, Prof. Al Zagha highlighted the need to reduce security-related expenses and invest instead in infrastructure projects. Furthermore, the continuing dependency on international donors and the absence of environmental projects was criticised. Finally, the discussion dealt with problems related to the informal sector and the broken economic connection between Gaza and the West Bank. The Minister of Finance was responsive to these concerns, but stressed his ministry’s difficulty in establishing sustainable economic structures given the circumstances of occupation.