The Friedrich-Ebert-Stiftung (FES) in cooperation with the Palestinian Non-Governmental Organizations Network (PNGO Net ) conducted a public conference entitled “Enhancing the Effectiveness of NGOs in Influencing National and Sectoral policies“, within the project “Strengthening the Role of Civil Society on Influencing the National and sectorial Policies”. The conference took place on Sunday 30th September 2018 in Gaza City. 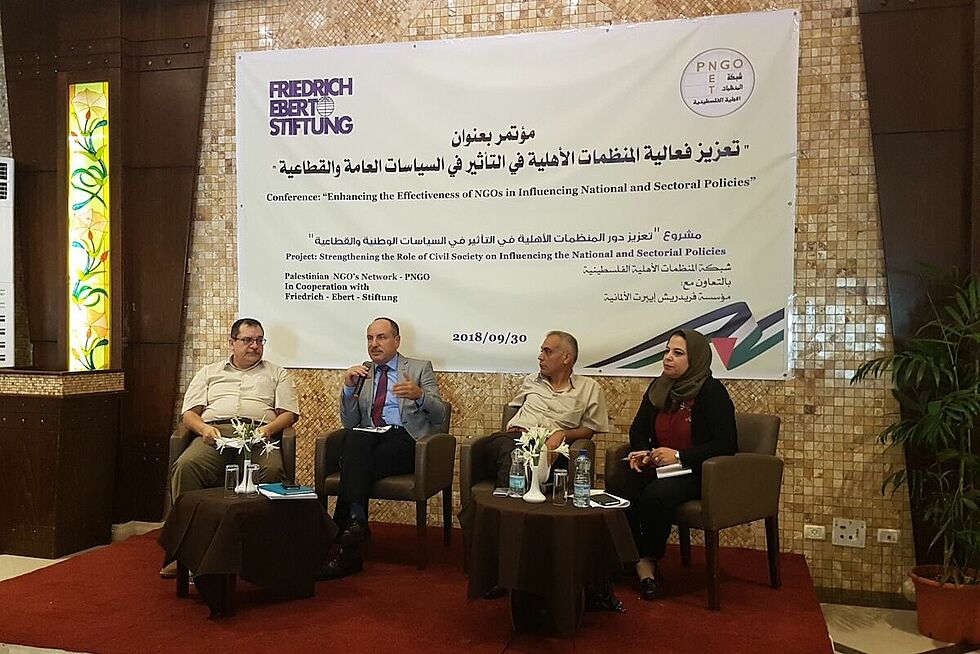 Prominent experts from the civil society were invited as speakers in the conference about the different aspects of the Palestinian national development plan 2017-2022. Mr. Tayseer Mohesen talked about the political dimensions within the National and Sectoral Policy Agenda. He stressed the lack of participation of representatives of the Gaza Strip in the development plan. He noted that there is a need of creating mechanisms for policy dialogue with the government in Ramallah. Mr. Mamoun Besiso, who talked about the national policies within goals of sustainable development, made clear that three components are still undermining the fundamentals of development in the Gaza Strip, mainly: The Israeli occupation through the continuous siege; the impacts of the Palestinian political division; and the international donations that launched humanitarian help and relief, instead of development projects. Ms. Nadia Abu Nahla criticized the national agenda regarding the gender policy and women in general. She added that the national policy agenda dealt with women as victims rather than on the basis of partnership in drafting the development plan. Moreover, she pointed out that the plan did not talk about measures for fighting the discrimination and exclusion of women.

More than 100 invited guests from civil society, researchers and journalists had a vivid discussion with the speakers. It was emphasized the importance of activating measures of monitoring and community accountability on the implementation of the national agenda.