The Palestinian prisoners' mass hunger-strike, the "Freedom and Dignity" strike, ended after 40 days last Saturday, after Palestinian sources reported that negotiations between the strike’s leaders and the Israeli Prison Services (IPS) had yielded tangible results. 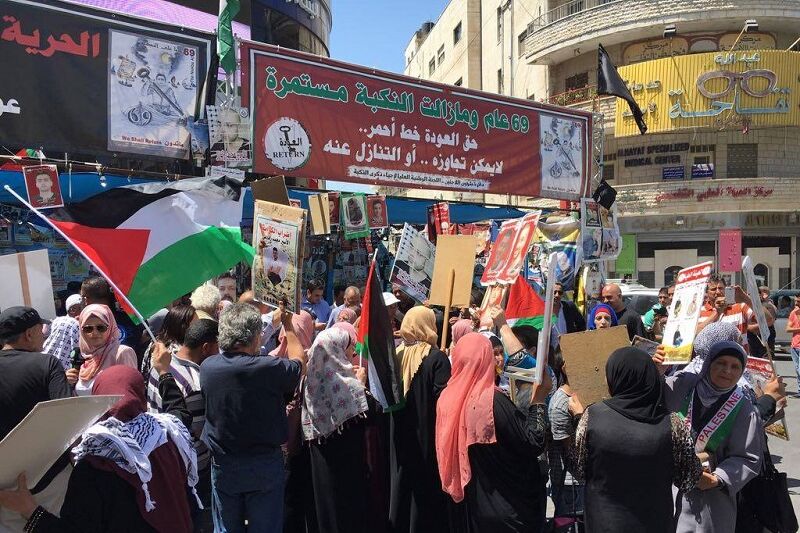 Photograph: The families of the Palestinian hunger-strikers celebrate in Ramallah on 27 May the news that the prisoners’ strike has successfully come to an end. Credit: FES Palestine.

Yet, the IPS denies having reached any compromises with the prisoners. The public dispute over the outcome of the strike could create further tensions in the near future.

As detailed in Friday’s Fact on 28 April, the Palestinian prisoner’s hunger-strike started on 17 April 2017, Palestinian Prisoner’s Day, under the leadership of popular Fatah Central Committee member Marwan Barghouti, who is currently serving multiple life-sentences in Israeli prison. Between 1000 and 1500 prisoners, most of them affiliated with Fatah, joined Barghouti over the 40-day period in which their only source of nutrition was salt and water. According to Palestinian prisoners’ rights group, Addameer, there are currently around 6500 Palestinians imprisoned in Israeli jails, among them 300 children and 61 women. Some estimate that 70 percent of Palestinian families have at some point had one family member imprisoned, making it an almost universal Palestinian experience.

The strike was launched in protest at what the Palestinian Committee of Prisoners’ Affairs in a statement called the “brutal and inhuman” treatment of Palestinian prisoners and to direct international attention to the denial of their basic rights in captivity. Demands centered on what Barghouti in a New York Times op-ed called “basic rights that should be guaranteed under international law”, but had turned into privileges, granted or taken away by the prison services. Among those demands were improved visitation rights for family members, better access to education and ending the medical negligence towards prisoners as well as the policy of administrative detention and solitary confinement.

The practice of administrative detention allows Israeli forces to imprison a person almost indefinitely without charge or trial, based on secret information. In such cases, neither the prisoner nor his or her lawyer can access the evidence brought against them. While administrative detention should only be used in exceptional cases – and for short periods of time – the extensive use in Israel has been widely criticized. There were 750 administrative detainees held without charge or trial as of April 2016, according to Addameer.

On Sunday, 28 May, the Palestinian Committee of Prisoners’ Affairs released a statement, saying that 80 percent of the prisoner’s demands had been met, calling it a “fundamental transformation in the terms of prisoners’ living conditions”. Both sides confirmed that prisoners will be entitled to two family visits instead of one per month – as previously was the case – but there is considerable disagreement on almost every other issue. While Palestinians, like the head of the Palestinian Committee of Prisoners’ Affairs, Issa Qaraqe, praised the hunger-strike as a “victory”, IPS denied having entered negotiations about prisoners’ demands at all. With the hunger-strike reaching its conclusion, it appears that the battle over of interpretation has just begun.

Meanwhile, Marwan Barghouti released a statement through his official Facebook page praising his fellow hunger-strikers’ steadfastness and denouncing the “harsh and brutal conditions” in solitary confinement during the strike. He stressed that, while the strike is suspended at this point, prisoners are prepared to resume their efforts if the IPS does not fulfill its commitments. This has reinforced the fact that suspicion still exists on both sides.

While PA spokesperson Yousif al-Mahmoud pointed to “heroic prisoners [who] achieved a new victory in their legendary resistance,” others were slightly more cautious, with PLO spokesperson Xavier Abu Eid calling the events of the hunger-strike an “indication of the reality of the Israeli occupation which has left no option to Palestinian prisoners but to starve themselves to achieve basic rights they are entitled to under international law”.